It’s been a BIG week for TENANT POWER and affordable housing in Seattle!

The tenants of Squire Park Plaza, mixed-income affordable-housing in Seattle’s Central Area set to be sold to a for-profit investor, met on Tuesday night with the Mayor’s office & other City officials to discuss their building’s future. Twelve hours later, on Wednesday morning, they were standing in front of their building on 17th & S. Jackson holding a press conference attended by three TV news stations, The Stranger, and Real Change.

Linda Johnson, Dennis & Joy Rudnick, Donna Mercer and Ron Walker, all tenant leaders at Squire Park Plaza, passionately told their stories and called on the current owner, the Central Area Development Association, to keep their publicly-financed building in the hands of a nonprofit that would be accountable to the community and keep Squire Park affordable for the long-haul.

That evening, the Mayor’s office confirmed a game-changing development:

the for-profit purchaser had walked away from buying Squire Park Plaza!

Check out Ansel Herz’s Slog article, and Natasha Chen’s report on Kiro 7 News for coverage on the press conference and this exciting development.

Squire Park Plaza Tenants have organized at a sprint for 30 days — they have directed the public eye to a real estate deal taking place in the shadows without tenant involvement or input. They have amassed a petition with over 350 signatures in support of their work. They have illuminated to the public yet another instance of publicly-financed affordable housing being sold to the private market. They have demanded—and won—a withdrawl from the for-profit would-be buyer. In only one month of organizing, with support from Tenants Union staff organizer Stina Janssen and community allies, tenants have achieved action and support from City elected officials and a window of hope for their building’s long-term affordability: as several non-profits have submitted bids on Squire Park, including the Low Income Housing Institute, which has committed to maintaining affordability for 50 years, long-term affordability at Squire Park is within reach. Tenants are celebrating this progress and planning next steps… stay posted!

Want to help out and get involved with supporting tenants at Squire Park Plaza? Contact Linda at (206) 770-8988 or email [email protected]
Other ways to help out: sign the petition and “Like” the Facebook page!

Tenants at Squire Park Plaza and the Theodora Apartments, who held a press conference last week announcing the filing of a discrimination lawsuit against their landlord, are sending a strong message to speculative for-profit developers who would profit off the backs of low and moderate income tenants:

Tenants will organize to defend our homes and we are a force the be reckoned with.

Will you build the movement? Become a member of the Tenants Union! Contact TU Membership Organizer, Elaine at [email protected] to volunteer or learn more about membership with the TU.

At the moment the news was breaking at Squire Park Plaza, tenants from the Lockhaven Apartments and Squire Park, Board Chair Corey Snelson and Board Member Sylvia Sabon, and TU Director Jonathan Grant, were testifying on mass displacement, illegal and economic evictions, policy options and the critical need for City action and tenant empowerment before a special Housing Committee meeting in Ballard, the Seattle neighborhood that has seen the city’s most dramatic rent increases. Check out the video, to be uploaded today at 2 pm.

Do you want to get involved with policy approaches to the crisis in affordable housing? Email Jon at [email protected]

Stay tuned for a summer of powerful tenant organizing and get in touch! There is a place for everyone in the movement for housing justice. 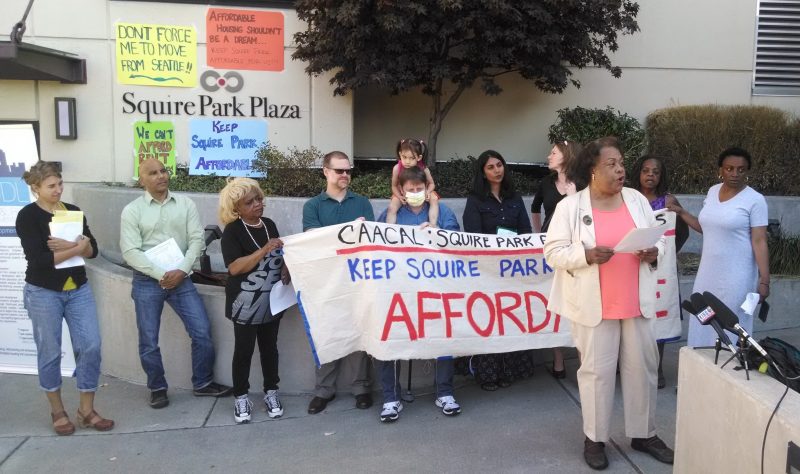